Pre ceramic textiles of Peru, 7000 BC and later

I just watched a wonderful Zoom presentation of the Hajji Baba Club, about early textiles using indigo, in ancient Peru.

I wondered what ceramics had to do with textiles, and eventually learned that, because there were no ceramics at that period, dyeing with ochers and indigo was most common, since without solid containers which could stand up to heat, to use as vats, it was not possible to do the natural dyeing which came in after the ceramic container was introduced.  Interestingly, it would have been much easier than indigo dyeing, which needed several processes, and for which the chemistry is more complex. 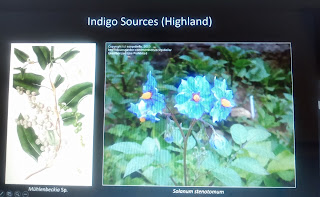 This is one plant source of indigo, which also happens to be an edible potato plant, an all purpose item of vegetation. I recognize the blossom shape from my own potato growing experiments in containers. 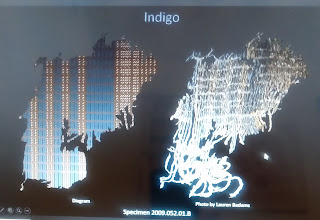 Because indigo dyed yarn or fabric changes color after it's lifted from the dye, seemingly magical as the colors change and end up blue, it was considered sacred, and was restricted in its use. 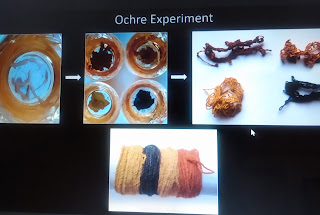 These experiments in using ocher dye were done by the presenter, and are remarkably similar to my own kitchen dyeing, except that I use natural plant material and flowers. He used potash as a mordant, as I do nowadays. 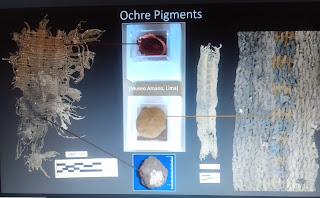 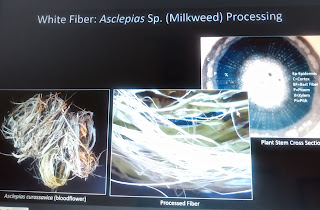 They also used milkweed bast for fiber production, and anyone who has watched Sarah Swett's adventures in milkweed where she's done exactly that, then spun and wove it, will be as riveted as I was by this historical confirmation. 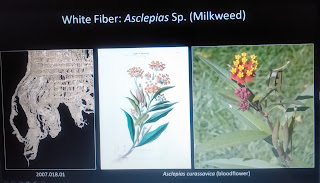 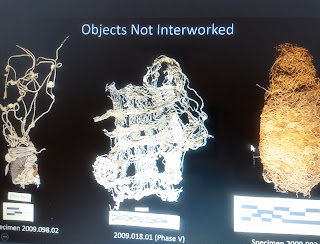 The fragments of  textiles have been recovered from a sacred site, about which I have some feelings, even if history is being served, and involved burials, also possible propitiatory offerings. There were some objects, probably funerary, which involved wrappings, and look startlingly like modern avant garde fiber craft work.

The twining and weaving in general was highly skilled, and mindblowingly complex, multiple warps, using a frame loom, handbuilt, the toba loom.  I'm looking to see if it's a backstrap affair.  I asked questions about this, and about what we know of the spinners, but lost my signal before they were into the q and a, so I'll have to pursue that myself. 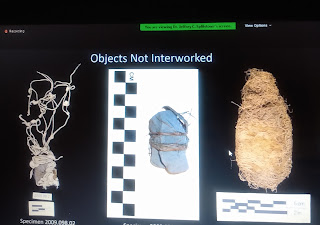 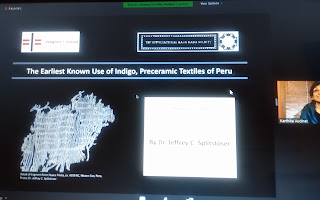 They were recording the presentation, which is this one, above,  Dr, Jeffrey C. Splitstoser, so it may be possible to find it again.  I think I'll give it a try.  They had viewers from all over the world, every continent, very exciting stuff.

If you are interested in history of textiles, natural dyeing, weaving, spinning (the presenter knew all about z and s spinning and pointed it out in the twine they used) you will really like this.  If I can find a link, I'll let you know about it.

I missed some bits, because friend next door was coming and going, doing work on my tire pressures and is also trying to improve his wifi signal which he shares with me, so there were interruptions which I had to attend to, he's doing me favors!  So maybe I can fill in the missing bits if I can find the recording on line and if it's available.