Blackwork is like dog owning.  You love it, you're engrossed by it, you are endlessly patient with its little quirks.  And you wish fervently it were all easier than hitting yourself in the head repeatedly.

I've undertaken a fairly ambitious piece of blackwork.  This is the Real Thing.  Proper counted thread fabric (kindly donated by my local chapter of EGA, the Princeton one, to be exact, generous sharing group), plus I acquired some stitch diagrams and charts.  Now people who have heard me whine and cry and stamp my little feet on Ravelry about charts and how I can't knit from them, don't ask me, can proceed to listen to my whining about blackwork charts. I can in fact follow them, but you know how it is, the squares on the fabric sort of move and change while you're not looking and omg there's another whole area Wrong.

It's a terrific learning path, despite all my wails and screams of rage, and will result in Something Nice with a destination as yet undisclosed.   As you probably know, the hard part about blackwork is that the back is supposed to mimic the front exactly so that there's no "wrong" side.  This is why your chart is such a tyrant.  This dates back to when the Elizabethans who had some stellar embroiderers available, had blackwork decoration on collars and shirts which could be seen from both sides.  Mine are okay for a beginner, but I doubt that Elizabeth I would have bought them.  Yes, but you see, Your Madge, if you just turn your cuff like that as you play your music, it will look just fine!  trust me, it will.

This project is going to be approximately 32 squares, two lots of sixteen with a gap running down the middle, the purpose a deadly secret at this point.  Every other square is to be left blank, but all the embroidered squares, sixteen in all, will be different designs.  The reason for the little chunk of thread in the blank areas is to stop me from accidentally embroidering in them.  The squares are about 2.25 inches on a side.  Just so's you know.  and the blank squares will allow for an afterimage, a phenom I love in art.  You stare at one square (may not work in this picture since it came out all blue instead of white, I scratch my head in puzzlement) with the design, then shift your gaze to an adjacent blank one and gosh look, you see it again.

One thread of DMC black floss in the embroidered squares, one thread in cross stitch around the blank areas, two threads in floss around the embroidered squares, so as to weight them a little bit. And the different darknesses of the cross stitch gives a subtle change to the overall look of it, not too square and in your face.  Anyway, as I always say, that's the plan!  and though my pic shows the lines a little bowed, in fact it's  just a camera quirk.  They're actually dead straight. 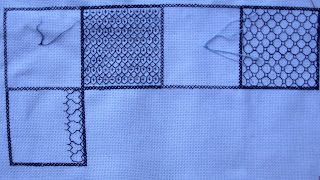 But I will say this:  I fully understand why the Elizabethans, who were into blackwork in a big way, drank beer all day long.  They claimed the water wasn't safe, but I'm not buying it. I'm just sayin.
Posted by Boud at 3:32 PM 2 comments:

I've put a couple of pieces into more of a presentation mode, just to get them off my table and onto the wall at least for the moment.  I have some ideas about how to extend the motifs in them, which I'll get into.  The black and white drawing of the weed is like a drawing I made of the same thing, using a real life weed as a model, beautiful architecture.  The bird has other sorts of potential. 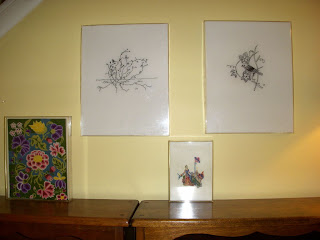 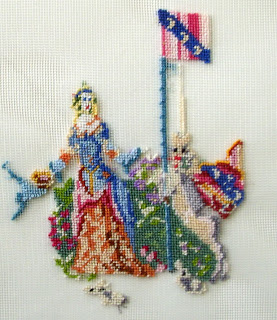 This selection includes a couple of works I made years and years ago, and I'm still fond of them, because they're among the few items I made just for me as a present.  Isabelle, every time I see the unicorn piece I think of you!  this is because I stitched it many years ago, one strand of floss, on 38 count silk gauze, using as my guide a picture of one of the unicorn tapestries that is still in France, in Cluny, I think. I left the background blank, because the silk gauze is beautiful in itself, no need to cover every part of it.  I know you treasure historic needlework, so I shot this image for you.

I realized that the needlework I've been doing this year is only one part of my art thinking.  I'm toying with image transfer -- came up in conversation recently, and I realized it could apply even here -- and with drawing the same image as in needlework, monotypes relating, and other ideas.  I think I see the seeds of a mixed media exhibit starting to fumble about in my mind, where several single media can work to portray the same motif.  The bird here in stitching, there in image transfer, there in drawing, there in monotype form, there in linocut, but all different, allowing for the different ways the medium works.

I've never seen the point of using one medium to imitate another -- no point in photographic realism in painting and drawing since the invention of the camera, after all, and stitched portraits are, well, same objection. But what's really important to me is to investigate what each medium itself can do, working on the same subject.  Anyway, I think that's the unfolding adventure for me this year.

But as we all know, woman proposes, Goddess disposes!
Posted by Boud at 11:02 AM 4 comments:

Here's the center motif of a little piece depicting a T'ang porcelain horse, I'm told a priceless artwork in some midwestern museum.  I'm going to decide what kind of background will work with this -- in fact I'd welcome any ideas from blogistas on this -- colors? stitches? color mixes?  bearing in mind that the motif -- see the accompanying ruler -- is about three inches total in each direction. 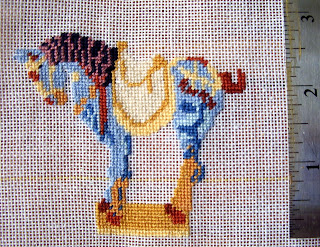 This is the kind of totally self indulgent stuff I love to do now and then.  The pattern is from a detective story by Monica Ferris, sorry, forget which of her books, but she always has a little design or tips on some needlework method in her detection.  She turned me onto the hardanger, in fact, and I plan to do more of that.  And I recommend her books as a nice light read with needlework interest added in.  The T'ang horse was an important plot point in the book the diagram comes in.


But once my horse is done, I'm on to blackwork, the real thing this time, since I now have the fabric and the right floss to work with, plus a great lesson series lent by a friend.

I find that I'm not a UFO type of person, feeling very uncomfortable if I have several needlework projects at different stages.  No good telling myself I'll do what the mood calls for, not that kind of artist at all.  I've always worked regardless of mood, weather, crises, so that doesn't work as a rationale for me.  And I currently have my little horse, a turtle, my nametag all hanging fire.  I did complete my black and white bird and the little drawing black piece, both on lawn, and need to stretch and frame or something.  The turtle I'll do along with the blackwork, maybe..and I'll GET the nametag done, not much left to do.
Posted by Boud at 10:05 AM 4 comments:

Souvenir of the prayer flag 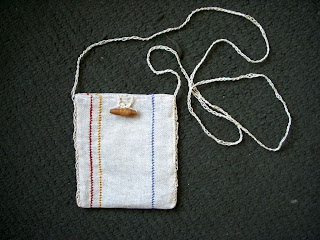 After the prayer flag left for its California destination, I was left with a nice scrap of linen, which I turned into a cellphone purse.  Drawn threadwork, hemstitching, my paper bead for a fastening, crocheted strap.  I just finished it now and it's a summer purse, tiny category.
Posted by Boud at 9:57 AM 1 comment:

There's a call for entries to artists anywhere, to create a prayer flag which will be flown at the Oceanside Museum of Art in California in October. Since I walk the labyrinth and experience the Tibetan prayer flags there, this appealed to me as a timely project, in honor of the life of Handsome Partner.

So here's my entry: it's approximately 5 x 8 inches, on linen, with perle thread numbers 5 and 8, hardanger, drawn threadwork and fraying. On the back I'll put a pocket for hanging it, and inscribe the prayer and my name and date, but the prayer is between me and the wind! it honors HP's part in reintroducing me to the fiber arts, during his last years, when I could not leave his side to go to the studio up two flights, and switched to art forms that I could safely work in. No fumes, no danger to his health, and he could watch and enjoy the progress of my weaving, and stitching, and knitting and crocheting. So this prayer flag is a kind of acknowledgment of all that. 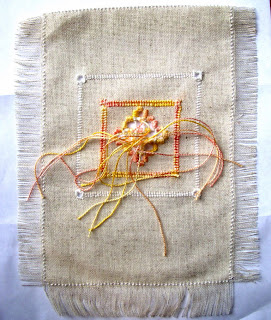 If you're interested in entering your own prayer flag, can be any approach as long as it's on fabric, go here for details:

Look Up -- Shapes in the clouds 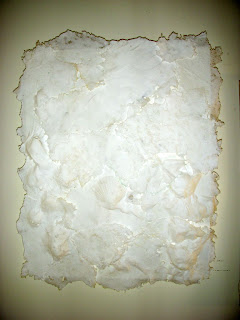 This is my entry for an invitation exhibit in September on the theme of Look up, Look down.  It's the result of those handmade paper experiments I showed you a while back, now in place and hanging.  The whole thing, minus the support, weighs maybe an ounce!  lot of loose edges which will catch the air currents  in the gallery nicely, like clouds. It's pure bright white.