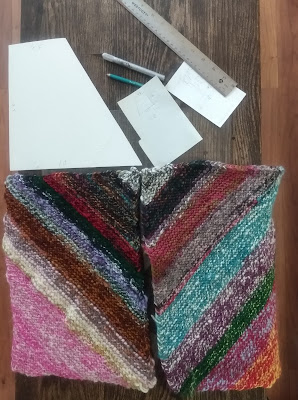 So here are the two fronts, at least the bottom part, finished, needing to be steamed and blocked, which is why they look a bit irregular. They'll match once steamed. One needs ends woven in, too.  But after that, and after I join together the two backispieces, I will be finishing the front yokes.

By weaving a piece of weft faced fabric, i.e. tapestry, to create the shape. I had thought of knitting it, but then couldn't be bothered with the calculations needed to get the decreases right, twice, once left, once right.  So I thought, since I've been wanting to make a cardboard loom to shape for ages, here's the chance.

It did involve a bit of counting and figuring, but here's the basic loom shape, in matboard, a piece of which I found left from an old artwork, it pays to save stuff. 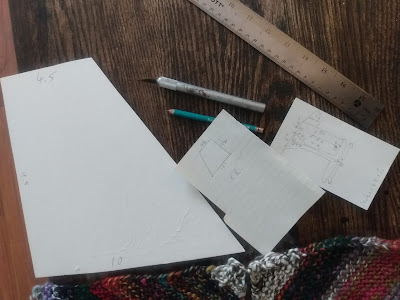 On the right, reading right to left,  you see the diagram I'm working from, which I made along the lines of a jacket that I have that I like the fit of, then the little diagram of the yoke itself, and the actual cut out yoke shaped loom. 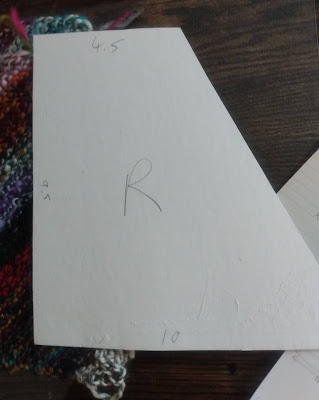 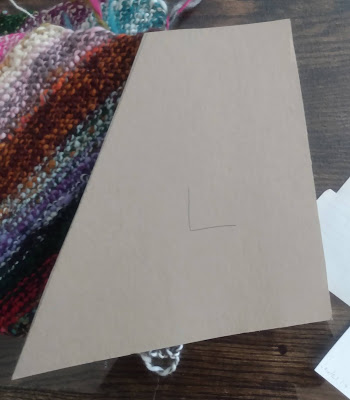 And the reason I marked it right and left is not that it matters to the loom, but that it matters to me to remember to have the right sides opposite each other.  Usually my finishing is good enough that both sides work fine, but you never know. I don't want to have two lefts or two rights. 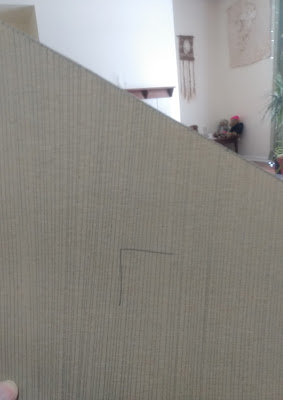 I'm going to warp it with cotton twine I've used before with my rigid  heddle loom, and will need to notch it for the warp threads at regular intervals with the xacto knife you saw up there with the diagrams.

I had thought of 8 wpi, warp threads per inch, marked as you see for study, which would work for the warp, but then decided my yarn is bulky enough that it might work better with 4 wpi, half the number of warp threads, so that the spun yarn doesn't bind up and stick out and generally not want to weave very well. And since tapestry involves completely covering the warp threads, hence the term weft faced, meaning everything you see is weft, it's better if the wpi helps you do that.  I can always change this if it starts not working.

I've cut the loom exactly to size and shape, and will have a good bit of weaving-in of warp ends to do once this is complete, but that's fine.  It's complicated enough figuring out how to weave it, without getting into four-selvedge calculations as well.  And getting it to fit on the lower sections happily.

I'll be weaving up and down the actual garment direction, which will be interesting, stripes going in a different direction from the diagonals of the rest of it. Also a traditional way of weaving tapestry, where you want sharp edges to your stripes.

I realize that this sounds a bit less comprehensible than certain politicians at the moment, but just let it flow over you. All will be well. You can enjoy the spectator sport of watching me wrestling with problems of my own making, so many of them are, after all.

But before any of this can happen, I have to spin the yarn!  Chop wood, carry water.