I've been hors de combat for a couple of days, after getting part one of the newish shingles shot. After seeking it for two years, finally the pharmacy had it in stock, and I seized the day.

Just as well I didn't have any commitments this weekend. When they say site pain and tiredness are common side effects, I am here to say, yes, yes.

My deltoid whined and complained, and I slept many hours. I suppose it means my system is working on it.

Up to now, none of the serious side effects I had  from the last flu shot, involving calls to the FDA etc. I survived and don't get flu shots any more.

I do encourage everyone else who can, to get them, though, for herd immunity. But the doctor and pharmacist both said the flu vaccine isn't similar to this one.  And a friend who has had both shingles and the shots says the shot is preferable. So there's that.

All this means I've been trying to occupy myself when awake, with something that didn't involve raising my arm or lifting stuff. Surprising how many things do require either or both.

I got desperate this morning and did a bit of spinning, very calming, felt really good. The yarn might become Izzy dolls eventually.

However spindle spinning if you sit, inevitably makes your shoulder go up as the yarn lengthens before you wind it on to the shaft. And I didn't feel too much like standing. 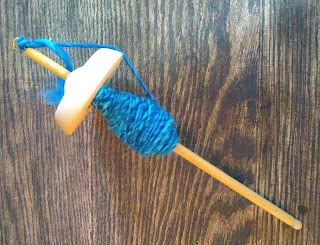 But I really enjoyed getting back into it. And here's the little bit I accomplished.  Much more cheerful now.
Posted by Boud at 10:13 AM 15 comments: Links to this post

Email ThisBlogThis!Share to TwitterShare to FacebookShare to Pinterest
Labels: Spinning

One of the pitfalls of organizing art materials is that you suddenly want to work with them, right now.

It's different when you organize a kitchen. I don't feel a great urge to wash floors and scour sinks when I'm sorting there.

But, going through yarns and other fibers,  I just  realized I still had quite a bit of my lovely Goats Magosh roving, set aside when allergies struck last summer. I've knitted up quite a bit of my handspun making Izzy dolls. So clearly I need to keep up the supply. Don't I? Don't I?
Posted by Boud at 11:46 AM 10 comments: Links to this post

Fleeting. By the time I uploaded and came in here, the shadows had changed. 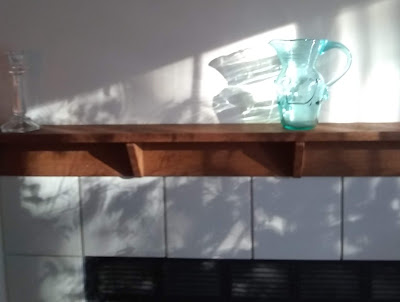 The Jersey lilypad pitcher, no, not antique, the known examples are all in museums or private collections, always wonderful in morning sun. The shifting foliage, too, blurred because moving in the wind, lovely accompaniment to morning tea.

This pitcher is modern, craftsman made, using same materials and techniques as the early Jersey glass, pride of southern Jersey. I think it's Wheaton. If any blogista can correct this, please do.
Posted by Boud at 6:06 AM 4 comments: Links to this post

Email ThisBlogThis!Share to TwitterShare to FacebookShare to Pinterest
Labels: Jersey lilypad in sun

Installed in the rear window of my car as of right now. 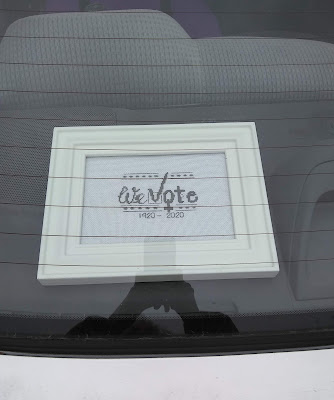 Email ThisBlogThis!Share to TwitterShare to FacebookShare to Pinterest
Labels: in rear window, We vote cross stitch

I just finished the get out the vote and tribute to the centennial of the US women's vote.

It's a multi purpose work. I'm not a cross-stitcher, though occasionally a cross stitcher, but this needed to be done. 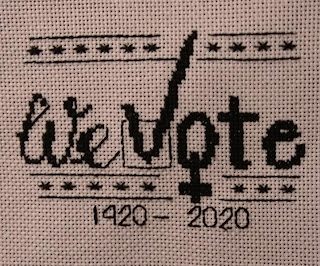 Designed by Katie Woznick.
Posted by Boud at 2:02 PM 2 comments: Links to this post

Email ThisBlogThis!Share to TwitterShare to FacebookShare to Pinterest
Labels: We vote cross stitch

Latest Izzy doll has joined the group of Most Wanted. 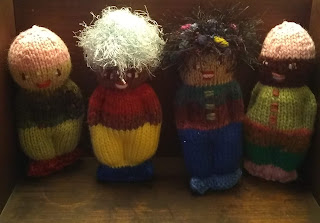 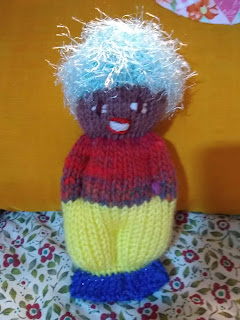 After  a few more, I'll ship a group to HPIC.  Canadian group of emergency healthcare professionals who deliver supplies and care in crisis areas and give the dolls to young children.
Posted by Boud at 1:08 PM 9 comments: Links to this post

I made it to the embroiderers guild meeting this afternoon, after months of conflicts with art commitments, but,  finally, no other meetings today, and I got there.


The program was created and presented by Lyna, a skilled researcher and historical stitching worker. She also has an academic career aside from her fiberart life. Manages everything with aplomb.

Today was a slide lecture on blue and white Deerfield embroidery.  Linen thread, stitched on linen, to reproduce a massive collection of colonial stitchwork. Which developed into a thriving business, in the Arts and Crafts period of the nineteenth century where craftsmanship had a resurgence and a ready audience.

Google on Deerfield, to learn about the town, its crafts and collectors. William Randolph Hearst's mother was a a keen collector of the embroidered hangings and domestic artworks.

And that was the main event. But wait, there's more.

Talented young designer Katie Woznick, has created a design honoring the hundredth anniversary this year of women's getting the vote. It's also a push to get out the vote in a critical year, at the same time.  Lyna translated the image into a cross-stitch project, distributed it today, and the guild is embarking on it, different sizes, different colors.

I heard that the designer's preference is black stitching, so I'm going with that. I know this because her grandmother is a stitcher in our chapter. We have the inside track on this one! 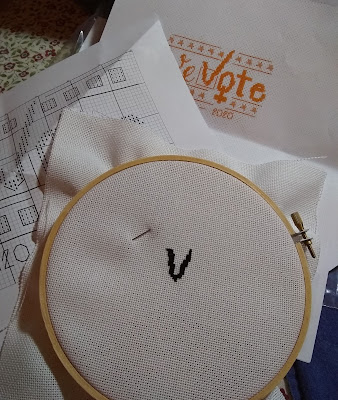 In the interest of protecting the image, I'm giving you just a glimpse, showing that I was so excited I dashed home to rush about my partly disassembled studio for thread, needle, hoop, and got right to work. That's my V started there.

This stitching speaks to my inner Get out the Vote activist, ready for post it posse again this year, and my inner stitcher. A harmonious convergence.

We'll be showing this project at the upcoming Stitch in Public event in February, when I hope to have mine done.

And, since I hadn't been at the guild meetings for a while, my friends caught up with presents, things I'd missed out on. 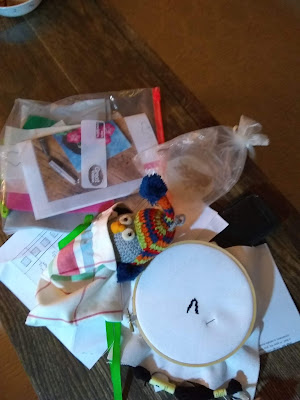 So I came home with some fun loot.

Pretty good way to spend a cold damp winter afternoon. This post didn't start out as a guild report, but it sort of wrote
itself.

Email ThisBlogThis!Share to TwitterShare to FacebookShare to Pinterest
Labels: Embroiderers'Guild

Shout out to one of my knitting groups 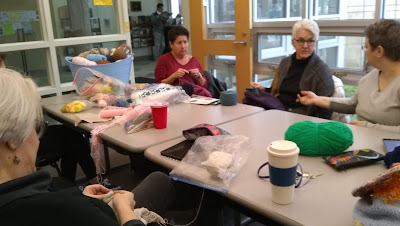 And completed art doll by Dina 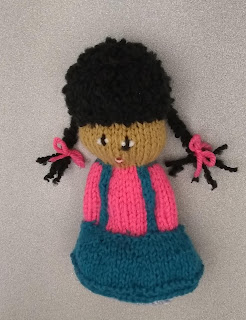 I heart my knitting friends.
Posted by Boud at 10:03 AM 4 comments: Links to this post

Some art has been happening, too, among the recycling

Here's the current state of the silk transparent hanging. Many more pieces to add and then probably join strips in some way. 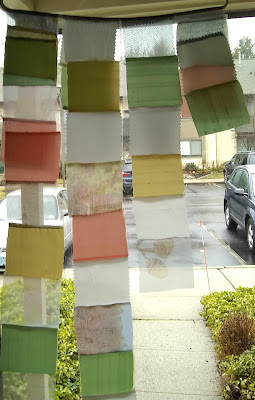 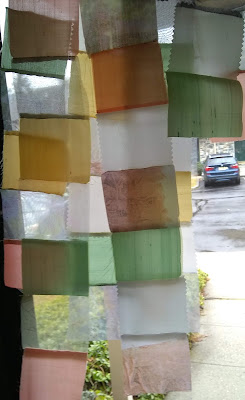 I love transparency, and I have samples of silk from Dharma Trading in here as well as squares cut from those artworks I printed out on silk. And some other random silk bits from here and there. As usual it's handstitched.

I'm making varieties of color neighbors, then we'll see if they read well when I'm further along. And I'll know better what size this will end up as. And what its destination will be. TBA.

Just so's you know I'm still at work in art, though you might not have noticed recently.
Posted by Boud at 9:56 AM 4 comments: Links to this post