Going through clothes, winnowing, selecting for upcycling, found this ancient t. My artwork. But an indelible black walnut stain. 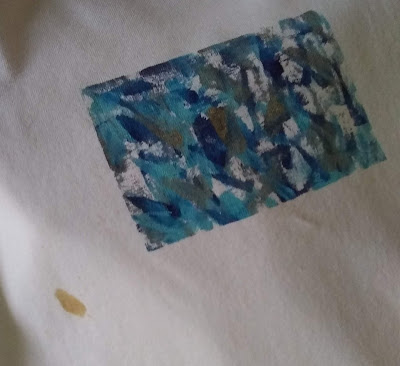 So now it's dusters and a future phone purse. 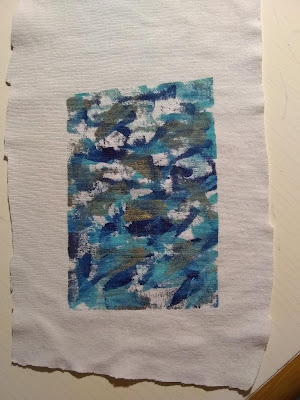 So here's the jacket, hemmed, pockets not yet attached, waiting a day to see if I still like the idea. 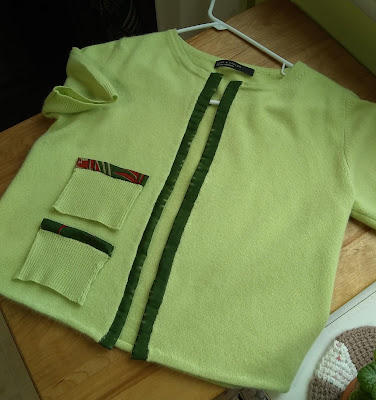 I'm a happy camper with how this came out. It involved delving into dressmaking memory to figure out a few skills I'd forgotten.

And while I was pressing it, up in the studio, I started casually shoving stuff around for future organizing. 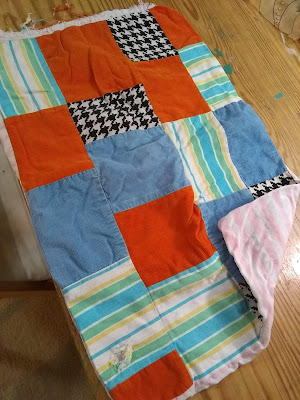 And came upon this tiny quilt. Made 50 years ago as a bed toy for Handsome Son, from bits of the coveralls I'd made for him. The turn-back shows the stripy crib sheet I first put him on as a newborn.

He played with this for ages. Since he recognized all the patches, he got a lot of pleasure with it.

I wrote a freelance article about it, which was published in one of the many mags I used to sell to. I used to write features regularly as a second income, back when there were many print magazines to submit to. I usually had about 20 pieces in circulation at any one time.

I taught feature writing for years too, at the yw, for women going mad at home with kids,and needing to develop new skills for themselves.

Some of them got published, too, very proud teacher. It was a lot of fun, and as usual with the arts, a great revelation to students just how hard it is. But how wonderfully satisfying too.  Very similar to later when I taught art to adults.

I could always tell who wanted to "be" a writer or artist from the people who needed to write or make art.

Then back to the quilt, after that spring-loaded jaunt into the past: over the decades, it was chewed on by various dogs. Then it became the blanket under the litter box. All in all, it's earned its keep. It used to be stuffed with a piece of blanket, long since abstracted by pets.

And now it's washed and just sitting in the fabric scrap crate. That fabric really held up under years of onslaught. So did its owner!

Whoever said pockets had to be one on each side? 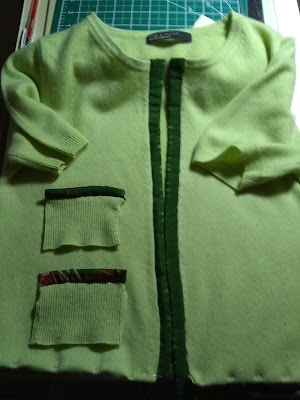 Here's a rough draft. Poor light, terrible photo  requires forbearance, but I was excited and wanting to post this.

Jacket with hem pinned ready to stitch, no trim. Instead, trim on two pockets, placed one over the other. The pockets are all made up, ready to attach.

I really like this, a bit different.  Pinned for now, need to try on tomorrow and see if the placement works.

Times like this it would be cool to have a dress form.

I decided how to use the trim, and here it is, attached to the two fronts. The bottom ends are open because if I decide to trim the hem, that trim needs to go under the side trim. So I'm keeping that option open for now. 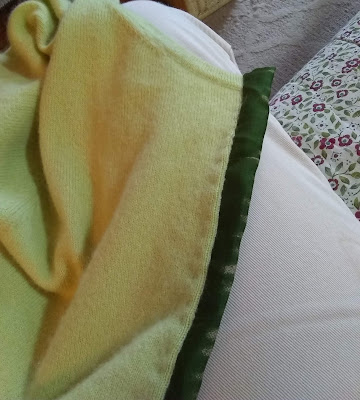 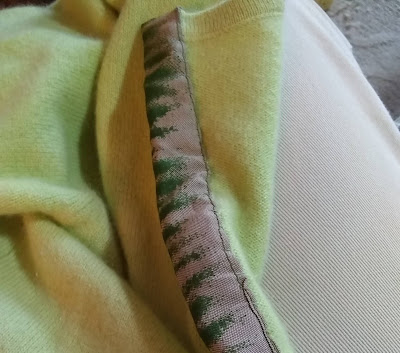 Inside, which will show since it's an open jacket. This looks bumpy because it wasn't pressed yet.

The reason I have to finish the hem is that the ribbing pulled the sides apart, not good. So I cut it off, and may make patch pockets with it, maybe even use a bit of trim there..hm.  It works better now, as you see. 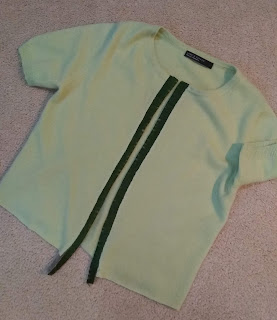 And you see the open ends, waiting till I decide how to do the hem. This one was photographed in cooler light, hence the color change. And it's steampressed, looks much more finished. Heat and steam are your friends.

I may end up doing a narrow rolled hem, since I'm not a fan of edging everything. Trim on the fronts and a bit on the pockets might work better.

Now I need to rest my hands a bit. I love to sew, and can never remember to stop in time.

Pot of tea now. Maybe a bit of YouTube in search of more trouble, I mean, great ideas which I have to do NOW.  After the piecing I'm still on.

So, upcycling is about to happen

Here's the lovely cashmere sweater that goes in the twinset. 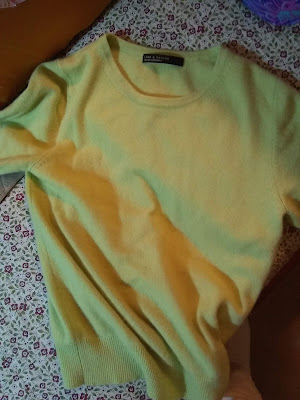 And I find it's too warm to wear next to my skin. So it's going to be a short sleeve cardi, after I cut it up the middle and bind the cut edges. To wear over a top.

I thought about what fabric I have, for binding, and remembered this completely stitched and finished section from a silk sari. Easy to apply. Lightweight even though it's two-sided. 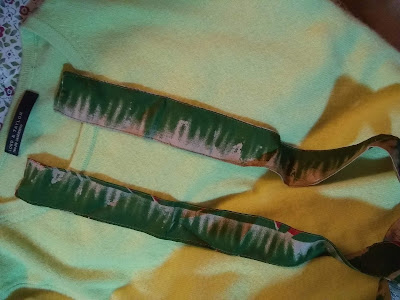 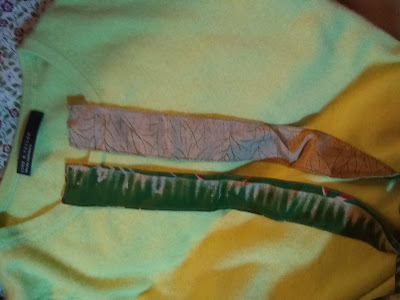 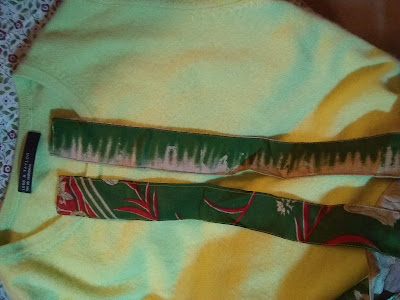 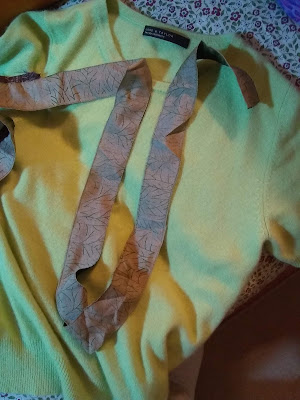 I just have to decide which side I like. Should both sides match? Contrast? Use the lighter colored side? The darker side? Decisions, decisions.

I haven't even got the scissors out yet. But I will end with a short sleeve jacket and a long sleeve cardigan. They don't have to go together after all.

And if one sweater is too warm, imagine two layers of cashmere together. Great for bitterly cold English stately homes, though. In one of which I don't live.

I've been watching clever young women on YouTube upcycling thrift store buys. I've been doing it for years, because you get what you want to wear, cheaply, kind to the Earth, too. And it's really fun. So I have a lot in common with them.  Except they have high end sewing machines. That's a difference. I have a range of sewing needles.
Posted by Boud at 4:13 PM 2 comments:

Done. I changed my mind about framing, decided it needed light coming through. 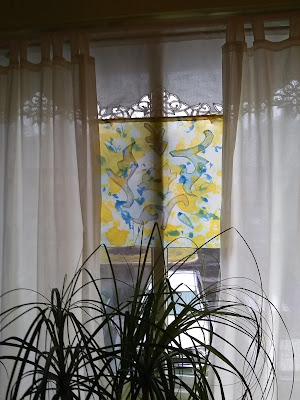 Another doll joins the group

So here's the latest arrival. It's hard to stop. 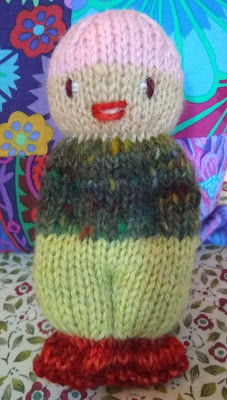 Another Izzy shows up 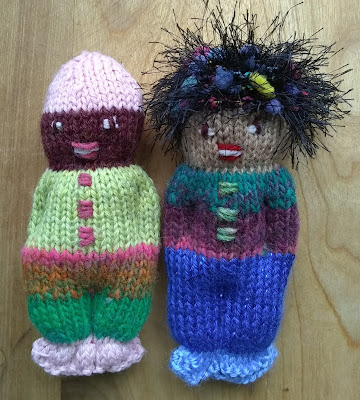 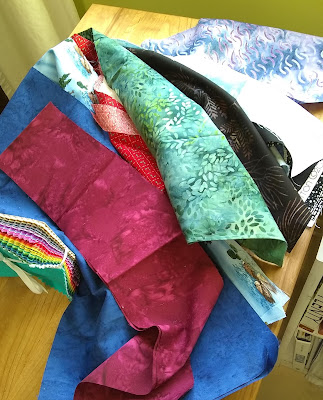 Thank you so much, K, it's lovely, and now  I have to go make a pot of tea and play with my new toys and all  the ideas they suggest.

Support like this is so helpful in keeping a person going.  I often seem as if my energy is endless, but I do flag sometimes, and this kind of boost is just the ticket.
Posted by Boud at 11:58 AM 3 comments:

So after all the cogitation, I moved away from the sari fabric, and I'm using this silk square as background for the appliques.

I dyed it, among other squares, for a stitching workshop a few years ago, and it wasn't used. So here it is, ready to be part of a painting in silks. 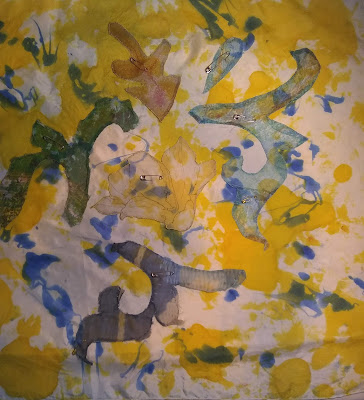 If you peer closely you'll see that the pieces are safety pinned, ready to stitch. And the shabby edges here and there will be turned under, as I stitch, so you will see a nice regular sharp edge. This is pretty much a rough draft. In fact, I moved one piece after taking this photo.

The pic is not great, since I don't have the light and distance needed to do a better one, without getting shadows. But you get the gist.

Making these appliques was pretty challenging, since they wanted to fray and skid away, but as you see, they do lie fluidly,  as I'd hoped. You can't get this sort of movement with cotton, or with anything that isn't transparent, come to think of it.