The Joy of Framing

Not. Least favorite of all art related requirements, framing. 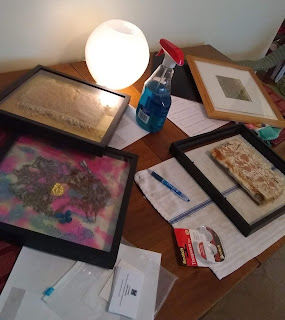 Here in the throes. Or as my Twitter feeders sometimes say, the throws. Makes me wonder what they think it means. Throwing your energy into it?

Anyway there's a juried show coming up, run by the Preserve. Theme NJ nature. Prizes,awards, one for Preserve related subject matter. Four pieces per artist, reasonable fee if you go for all four. Juried meaning competitive entrance. Mebbe you get in, mebbe you don't.

Soooo went through my framed and other items, moaning and polishing glass and spiffing up and reframing and generally having an awful time. Nearly done.

Of course it involved making more art for background, but I've managed to dodge the worst -- mat cutting. Just as well, because the mat cutter is at a friend's house. He's had it so long he probably thinks he owns it and is lending it to me.

Certainly different from wielding needles and hooks, though there's crochet and embroidery as well as dyeing and painting in the four selected.

And then there's The Filling of the Forms, bureaucracy collides with free spirit.

Email ThisBlogThis!Share to TwitterShare to FacebookShare to Pinterest
Labels: framing