EDM May 31, two views of the same lake

Out in the company of friends today, perfect day for the outdoors, at a nearby park with a lake, old trees, shade, all you need for outdoor work.

I made a painting 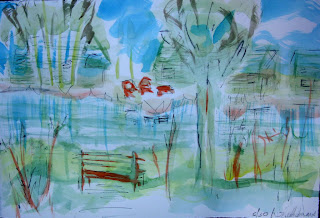 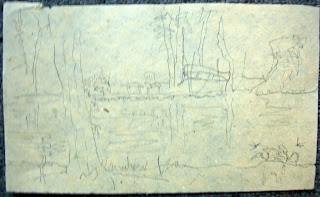 of the same scene, two opinions on what was in front of me. My plein air adventures continue. click to enlarge and see better.
Posted by Boud at 3:35 PM 2 comments:

The Art of Desperation 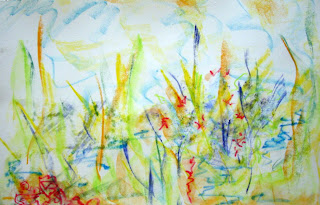 Today's EDM offering is the result of several hopelessly awful attempts. I tried a wash and ink drawing of the hanging basket I just put up, and the houses opposite in the background, and it was so stiff and unyielding that I figured hm, wrong day to try this.

You can't make better art by simply trying harder. Practice does improve skills, and you need skills to make art. But practice doesn't make art. You do need to allow for what you're up for today, and sometimes it means you picked a wrong approach and need to go back.

So I painted a coat of white monotype ink over the drawing, which made it very faint, went back in and picked up sparks of blue -- a lot of lobelia in the basket -- and voila! an even worse thing. So I damped another sheet, and took a try at a monotype off the original, since that often gives you a surprisingly improved view. But it didn't. Oh.

Finally I realized what I was doing wrong was taking too observatory an approach. So I tore off the paper jackets of a few Caran d'ache crayons, and went to another sheet of paper, drew a field of flowers using the sides of the crayons, curving and moving them, like using charcoal in a way.

And I found that this was probably what I shoulda bin doin all along. But there are days when it's not clear, and you just have to try various things until you either get fed up and go away and knit, or get a result you feel better about. This drawing was done on slightly damp Arches hotpress, to get a slightly gentler outline here and there.

I've often thought that when you switch around artforms as much as I do, that the approach needed by one can be a bit hostile to the next. I've been doing some very small knitting (a hoodie for a Dolliver, in alpaca yarn, on number 2 dpns, fyi) and since knitting is so linear and constructed, my mind probably got over a little too much into the prescriptive mode, hence the difficulty in loosening up to draw and paint. I remember that playing Atari many years ago when my son was young, had a terrific effect on my accuracy in doing the miniature needlepoint I did in those days, for custom works, probably because both called on the same kind of eye hand, limited decision horizon, type of thinking.

You'll notice that, though the handling of this piece is very loose, it is composed with left leaning areas and right leaning areas, to draw your eye in, and triangular areas to rest the eye on, and a foreground, middle ground and far distance. This isn't something I planned as I went, but I expect it's a hangover from the linear knitting time.
Posted by Boud at 7:38 AM 7 comments:

Asparagus is in at the farm 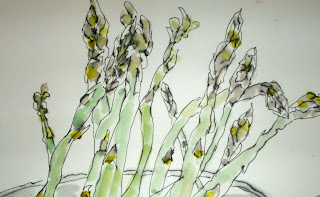 I picked up my first week's share at the farm, and as a celebration of the opening of the season, they made the shares strawberries and asparagus, spring and summer together. I wonder if there's anything better than a newly picked bunch of asparagus, tender and when steamed then dressed with lemon butter sauce, food good enough for artists!

The drawing doesn't do much justice, but since this is not about perfecting but about sharing, I'll put it up anyway!
Posted by Boud at 7:00 AM 4 comments:

I've decided that it would be good to do more plein air work, mainly to overcome my sense of being overwhelmed by stimuli out of doors, and learn to focus better. So I took my own advice this morning, wonderful weather, warm enough to be out, cool enough to work.

Just as cats are the best studio companions indoors, birds are the best companions in art out of doors. Nesting time means they're too busy to be worried about humans, and they zoomed about around me, two pairs of catbirds busy making a nest, swallows tearing about overhead and under the bridge I cross to get to this location, all kinds of birdsong all around.

I took pictures of the two paintings in the context in which I'd painted them, 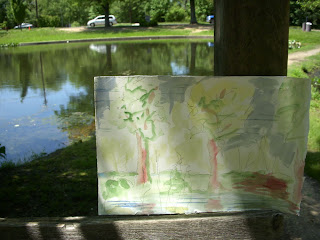 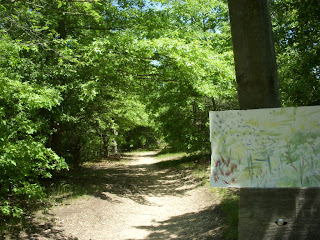 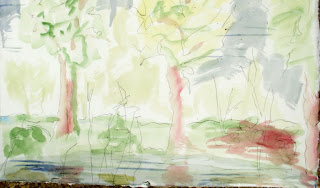 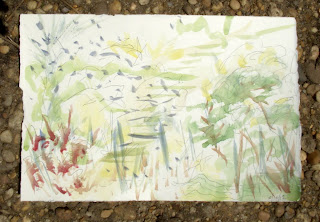 EveryDay Matters, the concept and the group, have become such a part of the fabric of my art life. I fervently wish I could remember who introduced me to the group so as to send thanks. If you're reading here, please speak up!
Posted by Boud at 10:52 AM 5 comments:

Bananascape with pears, paintbox and impedimenta 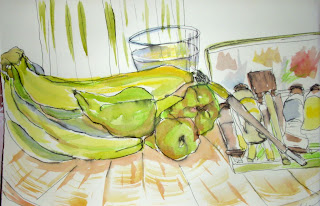 I broke up another Arches hotpress sheet, which gave me eight new supports for drawing and painting, so the bananas and pears seemed like good candidates. I drew them before adding the color, hence the paintbox and brushes and other stuff in the drawing.

It's hard to slow down my eye to draw bananas, because the instinct is to rush from stem to stern, that perfect curve, but I did my best anyway.

I love my Asian store. I bought the pears there this morning,and the Chinese clerk, no English available to her, using gestures, insisted I not buy two of them on which she'd seen tiny bruises. No, she would dump them, I should go back and try again! I did,and this time she allowed me to buy my choices.
Posted by Boud at 11:33 AM 2 comments: 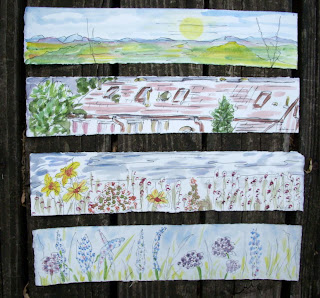 It being Mother's Day in the US and other countries, I figured that it was my day, I could just play and mess about, make here goes nothing type of drawings and paintings, and made a series of four narrows.

This was fun, in that I just did them in any old order, messing about with colors and shapes and whatever occurred to itself to do next. Then, when I set them up to take a picture, I realized that this is a new game: make the narrows, then arrange them in whatever order seems to give a narrative. I didn't make them in the order I photographed them. Who knows how this came about? it may simply indicate that I have a predictability that I'd rather not have, but it may also be a game that's fun to do, so you might want to take a shot at it. No need to be an "arteest" to do this,just do it for fun!

Today's series ended up being: sharp foreground, flowers, and things, then middle ground, then house roofs, then far distance. Not planned. Just sort of happened. Not in that order.

I was taking the picture on the deck when my next door neighbor came by to wish me the day, and he, a non-artist who often says he wants to learn, said, oh, I get it, art is about just enjoying stuff, and you do, you always do! that's what I need to do.

Now, artists know there's a lot more to it, including the need to make art no matter what, and the work of developing a few skills, but overall, yes, you need to do what you want to anyway! So there you are -- unplanned learning, on both our parts!

The neighbor from the other side came and joined us for a discussion of herbs, and left with a fistful of spearmint, very happy.

Handsome Son visited this morning, so all in all, great Mother's Day!
Posted by Boud at 2:40 PM 2 comments:

Yesterday's high winds brought me um, a windfall, in a way. My neighbor's bearded iris were whipped all over the place,being tall and top heavy, and after she'd used all her available stakes to save as many as she could, she cut the rest of the casualties and put them in a vase to give to me.

This gave me a wonderful group of models for a modified contour and wash drawing today, which I'm posting here. Iris rules! Contour is my favorite of all drawing styles, and adding wash is a nice addition of depth. 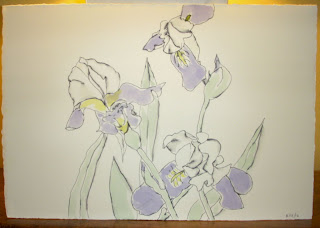 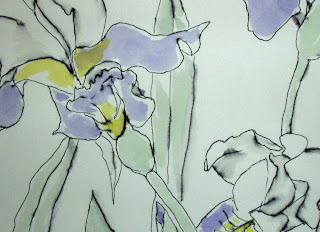 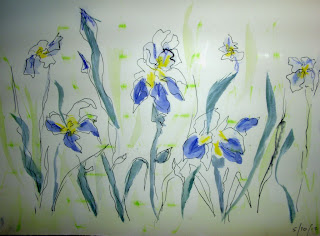 The iris suddenly bloomed this morning, out of nowhere, yesterday a forest of stems, today flowers coming out at warp speed, so I thought I'd better make a little drawing before the chipmunks bite them in two, their favorite sport. Arches hotpress, about 10x12 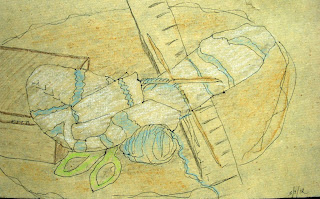 And a second sock in progress, plus the first sock, among impedimenta on the table, ink and caran d'ache on mulberry paper about 8 x 10
Posted by Boud at 12:56 PM 2 comments: 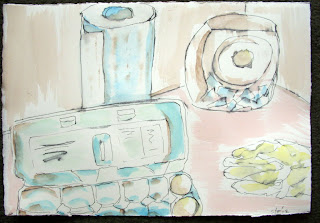 This felt huge, after the narrow strip paintings, though it's only about 10 x 12. Just a what's in front of you ink and wash.
Posted by Boud at 8:43 AM No comments:

EDM May 7, long narrow living/dining room with a peek into the kitchen!

This long narrow shape is an interesting mind exercise! not to mention using up long narrow paper bits..

I love this shape of paper. It's the ends broken off from larger pieces, to make the larger ones more appealing in shape. So I have several pieces 2.25 inches by 11 inches, and this panorama idea is one I like a lot. The patio lent itself well to this sweeping vision in a tiny execution.

Arches hotpress (hence the reference to breaking it, since you never cut good paper, you fold and break on the natural deckle that forms from the fold) with the trusty old Pilot Pen and Caran d' crayons. I expect one of these days I'll use something else, but for now these are working for me.

I have several series going: One is the series in my old square drawing book, one is the larger sheets of Arches hp, one is the brown mulberry paper ink drawings, one is tiny rectangular paintings, and this one is the first of a series of long narrow ones. Who knows what will become of them. I see artists' books, maybe, and then again, something else might suggest itself.

When the student is ready, the teacher appears. Or maybe leap and a net will appear. Or maybe they're both the same thing, after all. click to enlarge as always!
Posted by Boud at 11:12 AM 6 comments: 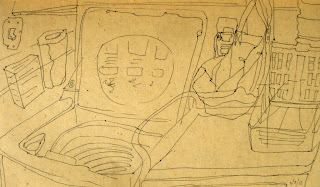 Drawing of my laundry area, which is a kind of alcove in the upstairs hallway where I put various things unrelated to laundry, by default. 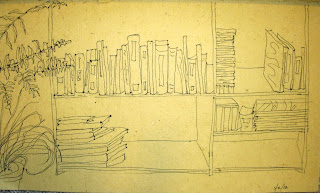 Drawing of one of my bookcases, pilot pen on mulberry paper. This series of small line drawings will probably end up being an artist's book, format yet undecided!
Posted by Boud at 8:30 AM 7 comments: